Who is John Dabrowski?

Who is John Dabrowski?

John has enjoyed a wide ranging and successful career which has seen him work across a number of sectors in the business and sporting world. He has played basketball both as a professional and for England in the Commonwealth Games. He still holds the British record for the most individual points scored in a single match which is 98 points.

He was a top performing premier league basketball club general manager for the Manchester Giants, a highly rated teacher, and an award winning radio sales manager. He then went on to develop a long and successful career in the advertising and marketing world as a multi award winning agency director.

He has travelled extensively in his search for new skills and techniques to help himself and now other people. He has a desire to make a difference in this world and wants to use his extensive knowledge and skills to help people ‘unlock their full potential’.

John has a particular gift in teaching visualisation and inner voice techniques which access the subconscious to help create the future people really want. John has personally used these techniques to great effect in both his sporting and business career. 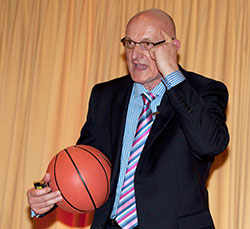 John is a gifted communicator who has extensively studied the great communicators of the past such as Dale Carnegie, Napoleon Hill, Jim Rohn, Norman Vincent Peale, Zig Ziglar, John Maxwell, Tom Hopkins and Brian Tracey.

He brings with him a lifetime of experience as well as a passion for the subject which is both infectious and engaging. He has a friendly and enthusiastic style of communication which has been commented on by many of the people who have either experienced his one to one coaching sessions or attended his dynamic workshops.

John is a man who is full of energy and has experienced many successes in the past. However, he sees this part of his life as the most exciting and fulfilling so far. He is convinced that he was born for this and all his past experience has led him to this point in his life.

Chicken Soup for the Soul

Today’s message is about persistence and the amazing things which can be achieved if you keep going and don’t give up. Jack Canfield and Mark Victor Hansen are famous for bringing to life the […]

“We found John to be engaging, enlightening and inspirational. He taught us techniques on mental resilience, staying positive and how to relax. Feedback from staff was overwhelmingly positive – he’s an engaging guy with a fantastic story.”

“I hired John to inspire and motivate my team at a recent team day. His presentation was based on mental toughness and with a fantastic mixture of inspiring stories and theoretical content.”

“On the back of a client recommendation the bank invited John Dabrowski to speak at the 2016 Legal Conference series hosted in London, Edinburgh and Manchester. John delivered a powerful, energetic and insightful presentation on developing mental resilience.”

“The presentation was professional, the content outstanding and your presentation skills were first class, it was the best presentation I have ever seen and the point of Mental Toughness really came through with flying colours.”

“Excellent presentation one of the best sessions/talks I have heard. Very thought provoking, motivational and provided a focus to meet challenges. The talk should be made available to a wider audience of the Trust staff.”

“A very impressive workshop, with an excellent range of practical Mental Resilience techniques, to help individuals cope better when they are under stress and thrive whilst under pressure.”

“John delivered a great speech, with plenty of enthusiasm, accuracy and entertainment. John has his own unique style which came over extremely well and it was a pleasure to watch him on stage.”

“You have a wonderful enthusiasm for your subject and a great ability to stimulate rich conversation. The clips you use are stimulating and clever and your ability to make a difficult subject accessible is unquestionable”